Over the past several years, American stocks have excelled. Such performance has defied the institutional consensus. For example, in 2014, Vanguard’s 10-year market forecast predicted that non-U.S. stocks would outgain domestic equities by an annualized 2 percentage points. Grantham, Mayo, Van Otterloo expected a 5-point gap for the next seven years. Equally pessimistic was J.P. Morgan, which ranked the future prospects of American stocks dead last among developed markets.

Has it always been this way? Have American equities always triumphed?

To address the question, I confined myself to the past half century. For one thing, it’s not clear that the relative showings of U.S. stocks during the 1880s, or even through the Great Depression, are relevant for 2021 investors. For another, while 150 years of data about U.S. equities are readily available, it’s harder to find similar information about their foreign counterparts. Fortunately, Morgan Stanley Capital International offers 18 country stock-market indexes, dating back to 1970.

This column’s first chart depicts the annualized total returns from January 1970 through November 2021 for each of the 18 countries, expressed in local currencies. (Measuring performance in U.S.-dollar terms would have shifted the order, with some countries increasing their rankings and others slipping down, but it would not have affected the general conclusion). 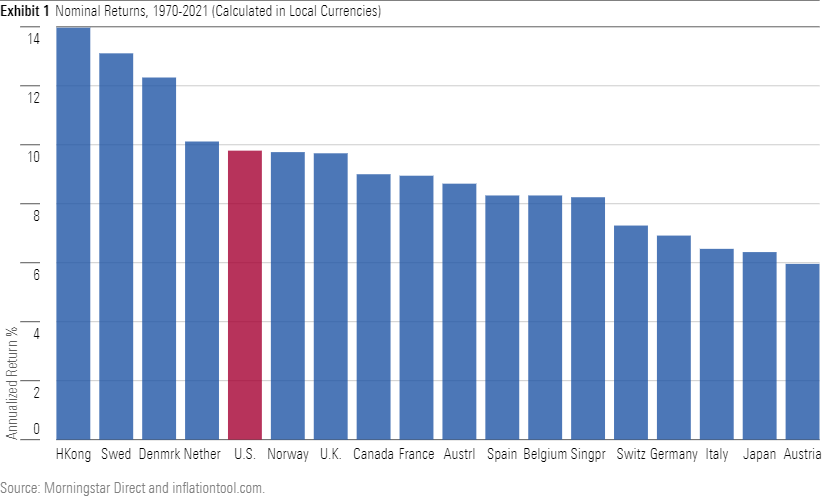 Call the result a draw. The United States led among the giants, outgaining each of the next three largest economies of–to use their 1970 rankings–Germany, Japan, and the United Kingdom. (In 1970, the Soviet Union and China each had larger gross domestic productions than did the U.K., but as those countries lacked stock markets, they don’t qualify.) However, the U.S. was not particularly special when compared with the smaller nations, placing fifth among the 14 remaining countries.

This initial test, regrettably, was incomplete. The returns were calculated in nominal terms, which is fine for evaluating outcomes within a country, where inflation affects all parties equally. But it fails when comparing results from different countries, which experience different inflation rates. My next step was therefore to calculate real returns. Doing so removed Hong Kong and Singapore from the list, as I could not easily obtain their 52-year inflation rates. 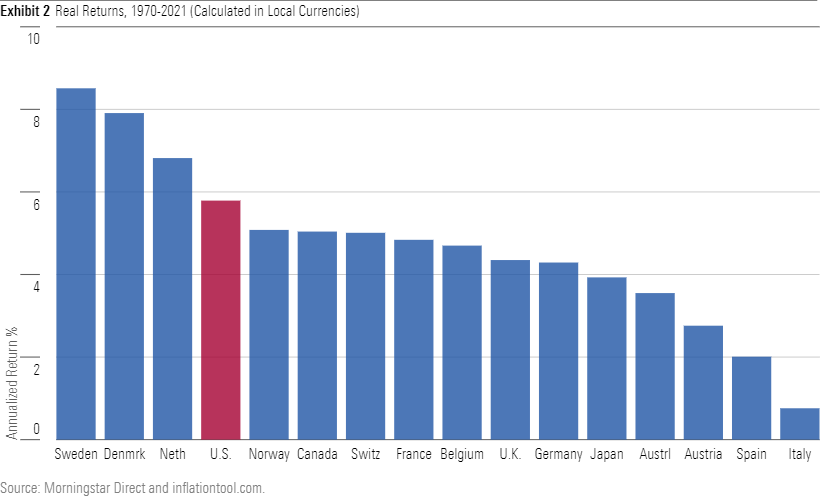 The leaders remained unchanged. After accounting for the effect of inflation, the five top countries from the nominal-returns chart retained their rankings. Further down, though, the nations shuffled. Thanks to its low inflation rate, Japan leapfrogged four slots. Conversely, the Mediterranean nations of Spain and Italy slid to the bottom. Although switching to real returns did not alter the U.S.’ position, doing so did improve its relative showing. The gap between the U.S. and its followers widened.

I wondered how much of the American advantage owed to recent results. Consequently, I halved the performance table, with the first section covering the 26-year period from 1970 through 1995, and the second from 1996 through the present. This time, I computed only real returns. The initial period appears below. 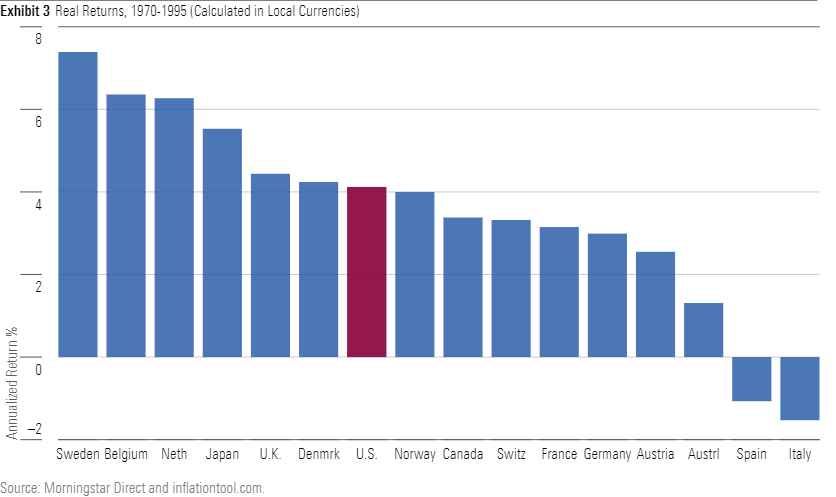 Through the mid-1990s, U.S. stocks were ordinary. This surprised me. After all, while the U.S. suffered stagflation in the ’70s, so did the rest of the world. Then, during the ’80s and early ’90s, which were my formative investment years, the U.S. business press crowed about American achievements. Europe was mired in sluggish growth, Japan had succumbed to speculation, but the U.S. thrived. I served my apprenticeship believing that the U.S. held a competitive advantage. Yet its stock market trailed both Japan’s and the U.K.’s.

The era’s other noteworthy aspect was its sluggishness. Real annualized U.S. equity returns were 4%, as opposed to the almost 8% average that they have posted over the past 100 years. The U.S. wasn’t an also-ran because it jogged while others sprinted. Instead, it muddled along with the rest of the developed-markets pack through what proved to be a relative bear market.

On to the most recent period: 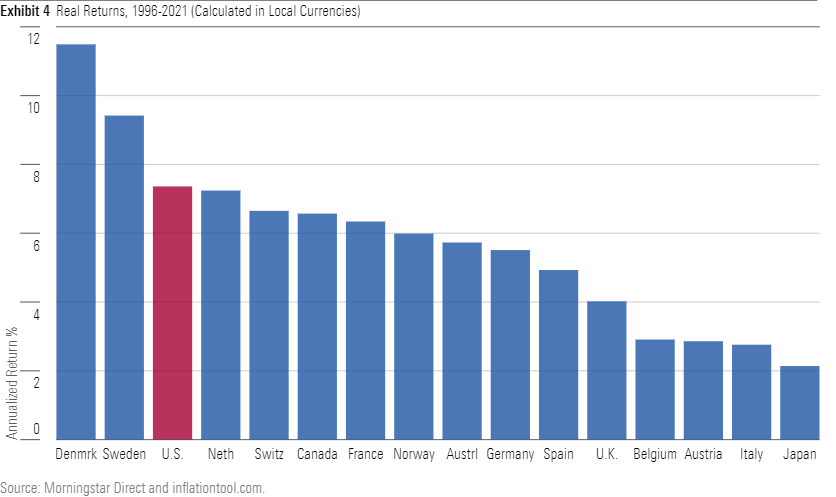 Now that’s exceptionalism! Admittedly, the U.S. lagged those stalwarts of Euro socialism, Denmark and Sweden. But it thrashed its major rivals of Germany, the U.K., and alas, poor Japan. American stocks also outgained Chinese equities, which were re-introduced in 1990. (An earlier incarnation of the Chinese stock market was shuttered in 1949, when the communists took control.) The big dog became bigger.

American equities achieved their edge by dominating the start and end of the 1996-2021 period. They thrived during the Great Bull Market of the late ’90s. The U.S. stock market struggled through the following decade, roughly matching other global equities, before once again surpassing their competitors.

The American success came from technology stocks. As with the overall U.S. marketplace, technology surged in the 1990s, then retreated, then rebounded after the 2008 global financial crisis. That the parties moved together was no accident. During the period, technology was the largest U.S. investment sector. It was also the best-returning industry, gaining 10.5% annually in real terms. Without its technology gains, the U.S. stock market would once more have been middling.

Proponents of American exceptionalism offer several arguments for, in their view, the country’s economic superiority. Among them are the nation’s business policies, entrepreneurial spirit, university system, support of free speech, and openness to new ideas. Perhaps those claims are correct; to adjudge them would require far more space than is occupied by this column. To the extent that these virtues exist, though, they do not seem to benefit other U.S. industries.

In summary, a bet on American ingenuity is a bet on the continued success of the technology sector. Prospects for the rest of the U.S. stock market appear to be no better or worse than what lies elsewhere.

John Rekenthaler ([email protected]) has been researching the fund industry since 1988. He is now a columnist for Morningstar.com and a member of Morningstar’s investment research department. John is quick to point out that while Morningstar typically agrees with the views of the Rekenthaler Report, his views are his own.

Wed Dec 29 , 2021
The U.S. stock market hasn’t followed the script in 2021. The S&P 500 index returned 26% through Dec. 16, well ahead of the roughly 10% gain projected, on average, by strategists at the start of the year. Many expected value stocks to finally best their growth counterparts after a decade […]