KARACHI, Pakistan — It was 20 years ago when the jihadi, a defense ministry official in the Taliban’s first government, fled Afghanistan as U.S. troops swept into the country. He settled in southwestern Pakistan with other Afghans, bought a house and became a baker.

Then, after Kabul fell to the Taliban last August, Khyal Mohammad Ghayoor received a call from a stranger who identified himself only by the dual honorifics, Hajji Sahib, which roughly translates to a distinguished man who has made a pilgrimage to Mecca. The man told Mr. Ghayoor he was needed back in Afghanistan, not as a baker but as a police chief.

“I am very excited to be back in a free and liberated Afghanistan,” he said.

Five months after their takeover of Afghanistan, the Taliban are grappling with the challenges of governance. Leaders promised to retain civil servants and prioritize ethnic diversity for top government roles, but instead have filled positions at all management levels with soldiers and theologians. Other government employees have fled or refused to work, leaving widespread vacancies in the fragile state.

To help fill the gaps, Taliban officials are reaching into Pakistan. For years, Pakistan officially denied the existence of Mr. Ghayoor and thousands of other ex-Taliban fighters quietly living within its borders. Now, the Taliban are privately recruiting them to return and work in the new government.

It is unclear how many former fighters have returned from Pakistan, but there have already been several high-profile appointments, including Mr. Ghayoor.

Arsala Kharoti, who had been working as a community organizer at a refugee camp in Pakistan, is now the deputy minister of refugees. Mawlawi Saeedullah, a preacher at a mosque in a Karachi slum, was appointed to a district judge position in Afghanistan’s eastern province of Paktika, resuming a job he gave up in 2001.

The new hires are walking into a mounting catastrophe. Hunger is rampant. Many teachers and other public sector employees have not been paid in months. The millions of dollars in aid that helped prop up the previous government have vanished, billions in state assets are frozen and economic sanctions have led to a near collapse of the country’s banking system.

“Running insurgency and state are two different things,” said Noor Khan, 40, an accountant who fled Kabul for Islamabad in early September, among hundreds of other Afghan professionals hoping for asylum in Europe.

In the first weeks of the Taliban’s takeover, roughly 120,000 people — including civil servants, bankers, academics and doctors — fled through airlifts organized by the United States and other foreign countries. Zabihullah Mujahid, Taliban spokesman, recognizing the personnel challenges the new government would face, tried to convince the United States to suspend its evacuation process in August.

“Afghanistan needs the expertise of its skilled people,” he said. “They should not be taken to other countries.”

A similar mass exodus of Afghanistan’s professional class occurred in the 1980s and 1990s, when the Soviets withdrew and the Taliban wrested control from the warlords who filled the leadership vacuum.

Then as now, the Taliban preferred filling the government ranks with jihadis and loyalists. But this time, some civil servants have also stopped showing up for work, several of them said in interviews, either because they are not being paid, or because they do not want to taint their pending asylum cases in the United States or Europe by working for the Taliban.

With any new regime comes new appointees, but the difference in Afghanistan is that the new government had operated as a hard-line Islamic insurgency for two decades, so the cadre of people they are plucking leaders from are soldiers and religious scholars, rather than political allies or technocrats.

Many of the selected theologians are graduates of Darul Uloom Haqqania madrasa, one of Pakistan’s oldest and largest Islamic seminaries.

Sirajuddin Haqqani, head of the militant Haqqani network and labeled a terrorist by the F.B.I., was appointed acting minister of the interior, overseeing police, intelligence and other security forces.

The new head of administrative affairs at the Education Ministry, also a mullah, wore a cartridge belt to his appointment ceremony in December.

Gaps in governance have started to show, including at Salaam, a state-run telecommunications company that, before the takeover, the Taliban routinely threatened and accused of providing intelligence about them to the former government.

“They have no experience to run the departments,” said Basir Jan, a company employee. “They sit in the offices with guns and abuse the employees in the departments by calling them ‘corrupt’ and ‘facilitators of the invaders.’”

Enayat Alokozai, a spokesman for the Ministry of Communications and Information Technology, denied these accusation and said Salaam’s service had improved under the Taliban. “All technical staff are in place and they do their routine duties,” he said.

Taliban leaders blame the United States for the collapsing economy. But some analysts say that even if the United States unfreezes Afghanistan’s state assets and lifts sanctions, the Finance Ministry does not have the technical know-how to revive the country’s broken banking system.

“Their response to the catastrophic economic situation is ‘It’s not our fault, the internationals are holding the money back.’ But the reality is that they don’t have the capacity for this kind of day-to-day technical operation,” said Vanda Felbab-Brown, a senior fellow at the Brookings Institution.

“One motivation to bring the people back from Pakistan is to offset the image of a brain drain,” she said.

Wahidullah Hashimi, a senior member of the Taliban’s council for training and educating soldiers, said that staffing problems stemmed from corruption within the last administration, and a foreign conspiracy to starve Afghanistan of talent — rather than the Taliban’s own dearth of it.

“Foreigners intentionally evacuated Afghans, most importantly, the educated and professional ones, to weaken the Islamic Emirates and undermine our administration,” Mr. Hashimi said.

“We are in touch with some Afghans in different parts of the world and are encouraging them to return to Afghanistan because we desperately need their help and expertise to help their people and government,” he said.

Former government employees say they worry that conditions in Afghanistan, already dire, could become catastrophic. Some of the Taliban returnees share this concern: As many as several dozen new government officials are keeping their families and properties in Karachi, according to Afghan refugee community leaders in the city.

Saeedullah, 45, did not fully pull up stakes when he returned to Afghanistan. Only half his family came along, according to Matiullah, a relative who stayed behind in Karachi and goes by only one name.

“The situation is still uncertain in Afghanistan and therefore we advised Saeedullah not to sell his properties in Pakistan,” he said. “Saeedullah’s two sons have been living with their families and running clothes shops in an upscale market in Karachi.” Saeedullah could not be reached for comment.

Abubakar Siddique, a journalist and author, said the Taliban remain dependent on Pakistan, despite their new grip on power in Afghanistan.

“They still consider it a safe haven to retreat to if things go sour in Afghanistan,” Mr. Siddique said. “Obviously, the Taliban leaders and mid-ranking functionaries do not want to risk all by bringing their families into a country that many Afghans are eager to leave.”

Mr. Ghayoor, the baker turned police chief, said that Kabul changed markedly in the two decades that he was away. As part of his duties, he tries to instill order at a busy produce market in Kabul as vendors tout fruit and vegetables, and taxi drivers call out stops, looking for fares.

“There is so much traffic, so many street vendors, and the drivers don’t even listen to me when I ask them to move,” he said, exasperated. “When I ask a street vendor to leave this spot and move on, he tells me, ‘What should we eat?’ I asked them, ‘What did you do with all the dollars the Americans were pouring into this country?’”

Mr. Ghayoor said in December that neither he nor any other member of the Kabul police force had been paid in months. Nevertheless, he said he decided to sell his bakery in Quetta, a city in southwestern Pakistan, and move his extended family, including nine children, to Kabul.

“The international community used to say it would be impossible for the Taliban to fight these strong forces, let alone taking over the government,” Mr. Ghayoor said, adding, “Yet, our operation is going pretty smooth.”

Sat Feb 19 , 2022
Text size Jerome Powell, chair of the Federal Reserve. Graeme Jennings / POOL/AFP via Getty Images The Federal Reserve could implement two interest-rate increases in one fell swoop next month. The stock market tends to perform poorly just ahead of that type of move, but things usually get much better […] 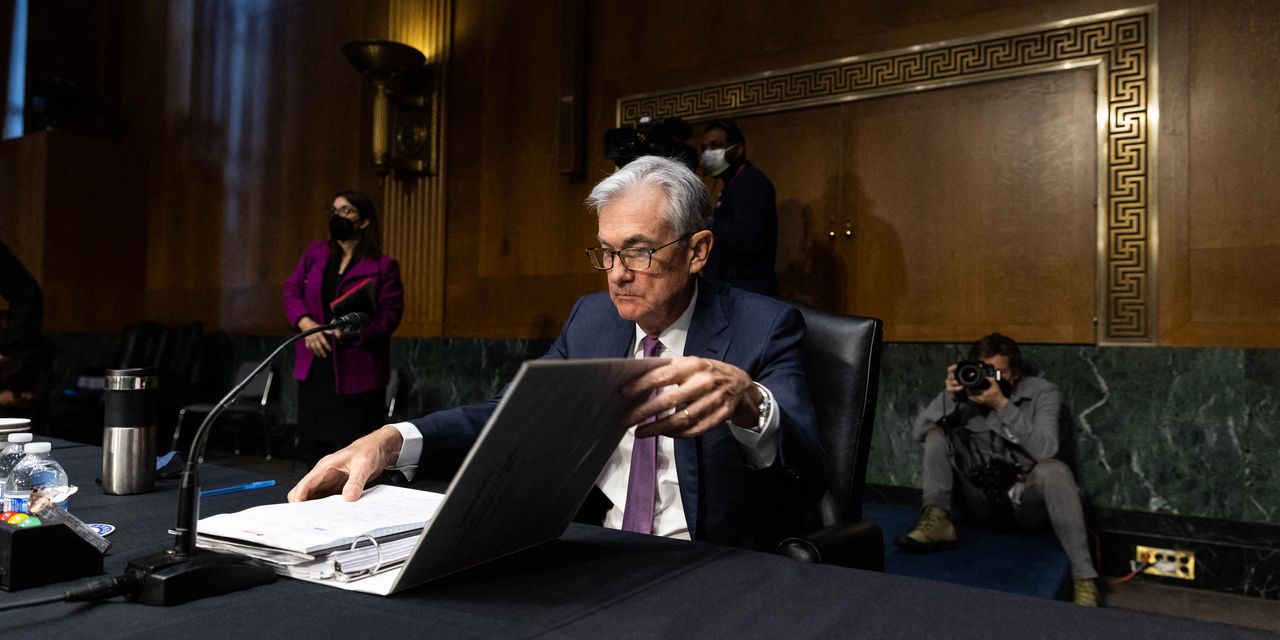