The first domino to topple was ARK Innovation ETF (ARKK). The most celebrated fund of the previous year, having scored a 156% return, ARKK began 2021 where it had left off. By Jan. 25, it had already gained another 18%. The sky was the fund’s target. That day marked the fund’s peak. Manager Cathie Wood would garner further headlines, but the fund has been retreating for a full year now.

The same week also marked the top for meme stocks. Based largely on social-media enthusiasm, such issues boomed during late 2020. As with ARKK, those stocks started 2021 with a bang but quickly fizzled. Bed, Bath, & Beyond (BBBY), Peloton Interactive (PTON), and most notably GameStop (GME), posted their all-time highs in January. (AMC Entertainment (AMC) lasted for a few more months, but it too subsided.) A slew of recent articles have buried meme-stock investing, but the truth is that those securities have long been dead on their feet.

Also struggling have been special-purpose acquisition companies, or SPACs. Although new SPACs continue to be launched, most notably Digital World Acquisition Corporation (DWAC) (covered last week in this space), SPACs that completed corporate mergers have crumbled over the over the past year. From February through September of 2021, reported Goldman Sachs, an index of SPACs trailed the S&P 500 by 49 percentage points. Now that’s a bear market!

The common link shared by SPACs, meme stocks, and the companies owned by ARKK was abundant hope for the future accompanied by negligible (or nonexistent) current earnings. In a word, those investments were speculations–the stock market’s chanciest securities. And when other stocks continued to rise, the speculations slipped. The following chart omits SPACs and meme stocks, for which I possess no index data, but it does depict how ARKK fared from late January through early November 2021 against other stock-market segments. 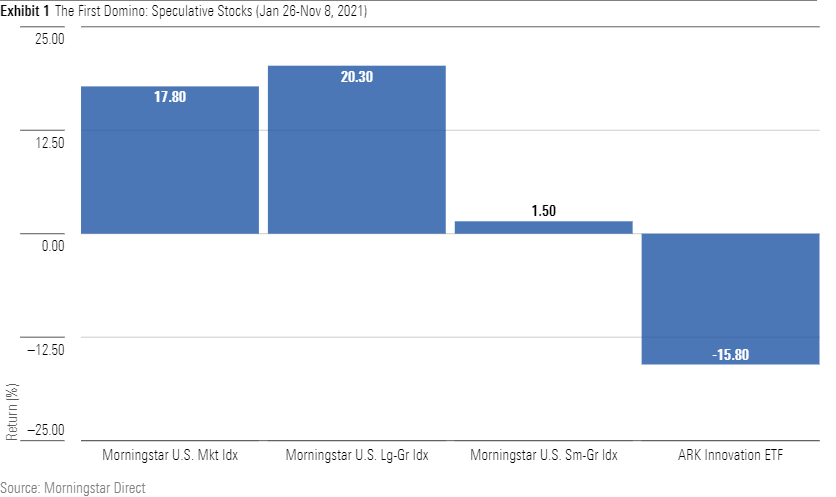 Unsurprisingly, small-growth stocks placed closest to ARKK. Meme stocks, SPACs, and ARK’s fund are the first rung on speculation’s ladder. The second is the broad group of small-growth companies, as represented by the Morningstar U.S. Small-Growth Index. Such businesses are steadier than those that occupy the initial rung, but their stock-market fortunes nevertheless depend greatly on investor optimism. When buyers become wary, these typically suffer.

That began to occur in early November. To be sure, ARKK performed worse yet (as did meme stocks and SPACs, though once again their returns are not shown), but small-growth companies nevertheless underwent a correction through year’s end, shedding 11.4% of their value. Large-growth stocks suffered a modest decline through that period, while the U.S. stock market overall was flat. 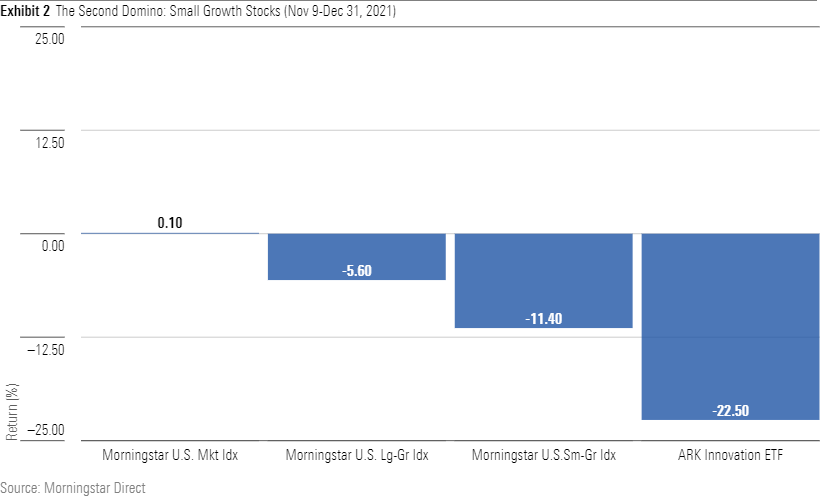 This year we are seeing a third domino: large-growth stocks. From the new year through this past Wednesday, large-growth companies have joined the party. Once again, ARKK led the way down. (If you sum the losses for the fund that appear in this article’s three charts, the total loss is 65%. Fortunately for the fund’s shareholders, the math works otherwise. The fund’s cumulative drop is 49%.) This time, however, large-growth stocks slid along with their small-growth rivals. 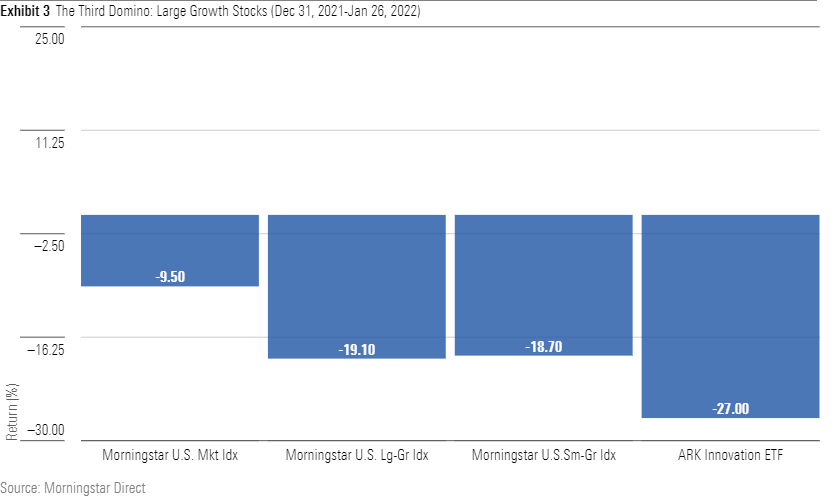 On Jan. 5 of this year, my former Morningstar colleague John Coumarianos published a highly prescient article. Noting that that the small-growth indexes were drooping, with the most aggressive of such indexes performing the worst, John wondered whether such behavior was the proverbial canary in the coal mine. The last time small-growth companies so badly trailed other stocks, he points out, was early 2000. Shortly thereafter, blue-chip growth stocks also turned belly-up.

As they have since done. Now that’s market-timing!

The critical question, of course, is whether this month’s carnage completes the process or merely jump-starts it. That depends heavily upon corporate earnings. Although the 2000-02 technology downturn is largely remembered today as being the inevitable outcome of an investment frenzy, the valuations were only half the story. The other half was eroding profitability. From February 2000 through February 2002, the earnings reported by the companies in the Morningstar U.S. Technology Index dropped by 50%.

Today’s blue chips do not appear to face a similar future. Of course, as Yogi Berra perhaps said, it’s tough to make predictions, especially about the future. But it’s difficult to foresee what could torpedo the operations of the major growth companies such as Amazon.com (AMZN), Apple (AAPL), or Microsoft (MSFT). After all, the developed countries seem to be early in their economic cycles, rather than late. Maybe a collapse in the Chinese economy? But that is the sheerest of guesswork.

To some extent, the stock market’s current behavior can be explained by the precept of “risk on, risk off.” By that framework, speculative investments–such as the ones mentioned in this column, or emerging-markets equities–thrive when central banks are accommodating and investors are ebullient. However, when money becomes tighter and investors warier, a flight to quality occurs. Aggressive securities wane, safer investments appreciate.

With the Federal Reserve signaling that money will soon be harder to come by, aggressive securities have indeed waned. Besides growth stocks, cryptocurrencies have also sunk since early November. That said, risk is not entirely off, nor is safety entirely on. During that period, the traditional havens, Treasuries and gold, haven’t exactly blossomed, with Treasury prices weakening (albeit modestly) and gold being roughly flat. Further complicating the analysis is the continued success of that most experimental of marketplaces, transactions in non-fungible tokens.

In summary, today’s equity downturn is alarmingly reminiscent of what occurred 22 years ago, when a sell-off in speculative stocks presaged far greater losses. However, the historical comparison will be complete only if growth-stock earnings also stumble.

John Rekenthaler ([email protected]) has been researching the fund industry since 1988. He is now a columnist for Morningstar.com and a member of Morningstar’s investment research department. John is quick to point out that while Morningstar typically agrees with the views of the Rekenthaler Report, his views are his own.

Sun Feb 13 , 2022
I was talking to a lawyer recently who shared with me a story I hear too often. His client’s longtime in-house legal team changed when the general counsel left his role. My client was left odd-man-out when the new in-house counsel arrived and brought in his own favorite law firm. […] 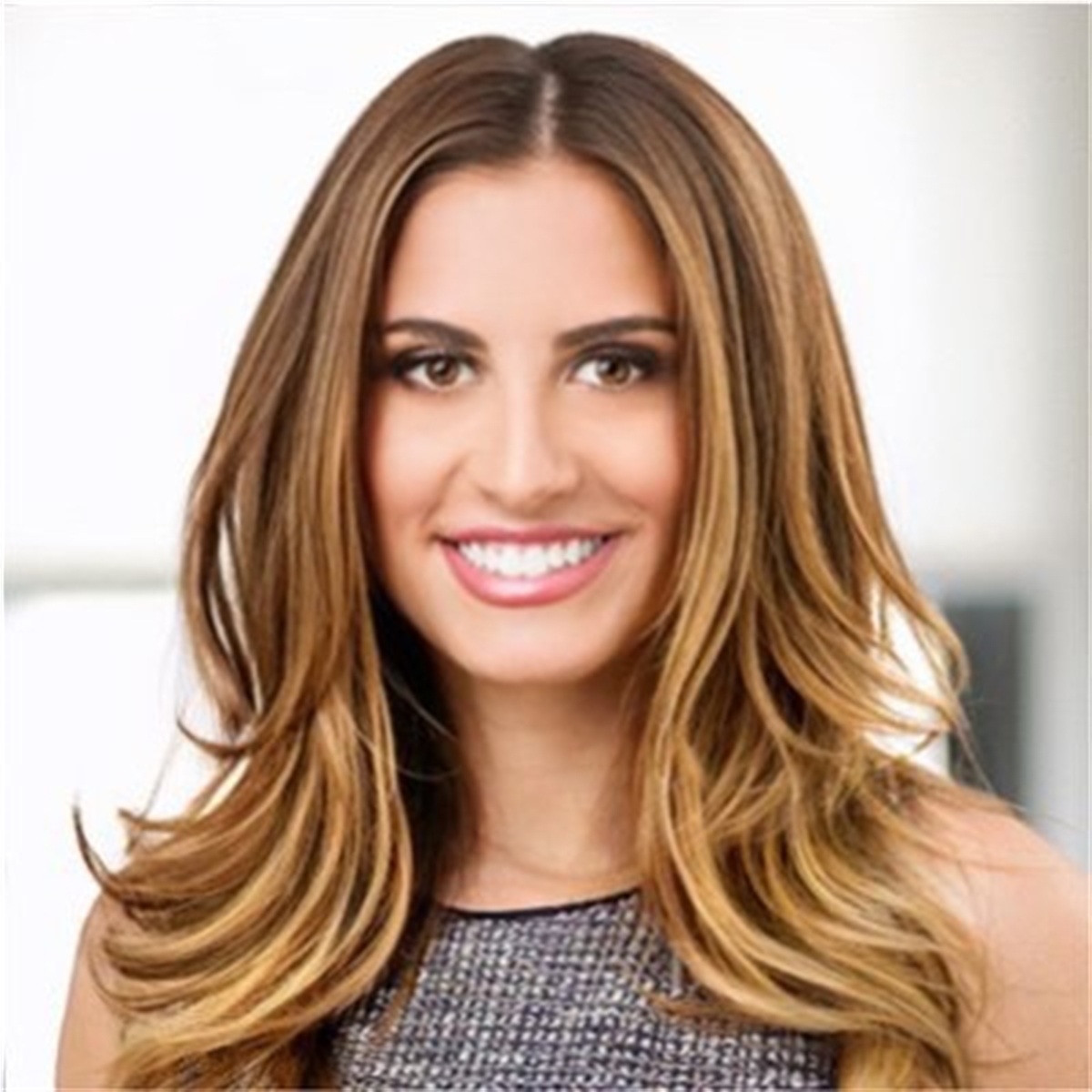