(RTTNews) – The Malaysia stock market has moved higher in three straight sessions, gathering almost 20 points or 1.2 percent along the way. The Kuala Lumpur Composite Index now rests just above the 1,600-point plateau although it may spin its wheels on Monday.

The global forecast for the Asian markets is soft on concerns over the outlook for interest rates and economic slowdown. The European and U.S. markets were sharply lower and the Asian bourses are tipped to open in the red.

The KLCI finished slightly higher on Friday following gains from the financial shares and glove makers, while the plantations were mixed and the telecoms were down.

The lead from Wall Street is broadly negative as the major averages opened solidly lower on Friday and saw the losses only accelerate as the day progressed.

The continued weakness on Wall Street reflected ongoing concerns about the Federal Reserve aggressively tightening monetary policy. Fed Chair Jerome Powell has said he sees merit in “front-end loading” policy moves and indicated a 50-basis point rate hike would be on the table at the central bank’s next meeting in early May.

Crude oil futures skidded on Friday on fears over falling energy demand and concerns about an economic slowdown. The dollar’s surge amid Fed’s aggressive stance on tightening monetary policy weighed as well on oil prices. West Texas Intermediate Crude oil futures for June ended down by $1.72 or 1.7 percent at $102.07 a barrel.

Wed Apr 27 , 2022
[Stay on top of transportation news: Get TTNews in your inbox.] Walmart Inc. is preparing to create its own cryptocurrency and collection of nonfungible tokens, filings with the U.S. Patent and Trademark Office show, setting the stage for meeting its customers in the emerging metaverse. The retailer sought several new […] 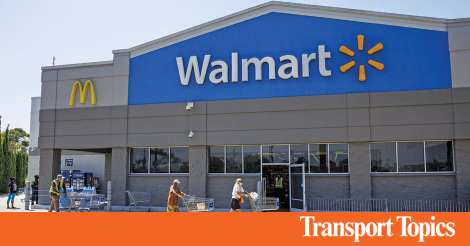