Nearly two years ago the world’s oil producers slammed on the brakes and drastically cut production as the pandemic gripped the world’s economies. The sharp pullback came with an implicit promise that as factories reopened and planes returned to the air, the oil industry would revive, too, gradually scaling up production to help economies return to prepandemic health.

It isn’t exactly turning out that way. Oil producers are finding it harder than expected to ramp up output. Members of the cartel OPEC Plus, which agreed to cut output by about 10 million barrels a day in early 2020, are routinely falling well short of their rising monthly production targets.

“In a lot of places, once output has been reduced, it is not easy to bring it back,” said Richard Bronze, the head of geopolitics at Energy Aspects, a London-based research firm.

Production in the United States, the world’s largest oil producer, has also been slow to recover from its one-million-barrel-a-day plummet in 2020, as companies and investors are wary of committing money amid climate change concerns and volatile prices. The Energy Information Administration forecasts that U.S. crude output in 2022, while rising, is likely to average half a million barrels a day below 2019 levels.

This global pattern of lagging production has helped push oil prices to seven-year highs, stoking inflation, which has become a political issue in the United States and elsewhere. Brent crude, the international standard, is close to $84 a barrel, while West Texas Intermediate, the American benchmark, is selling for close to $82.

A prolonged period when more oil has been consumed than pumped has drained tank farms to low levels. Investment in new drilling for new oil has also fallen to multiyear lows, though it is expected to pick up this year. At the same time, demand is expected to grow strongly, reaching prepandemic levels this year.

“The oil market appears to be heading for a period with little margin of safety,” Martijn Rats, an analyst at Morgan Stanley, the investment bank, wrote in a recent note to clients.

The gap between the target announced by OPEC Plus, which makes up nearly half of the world’s oil output, and actual output seems to be growing. The International Energy Agency, a Paris-based forecasting group, pegged the shortfall of the 19 OPEC Plus countries covered by quotas at 650,000 barrels a day for November. Energy Aspects forecasts that the deficit will reach just over one million barrels a day this month, or 1 percent of world supplies, and will probably increase later in the year.

That deficit could be problematic, because policymakers and some analysts may be overestimating how much more oil the group can add.

“OPEC Plus has been viewed as the main place that additional supply is going to come from,” Mr. Bronze said.

Of course, higher prices are likely to encourage a substantial increase of shale oil production in the United States. The tight market also gives Washington an incentive to lift sanctions on sales of Iranian oil by reaching a deal on Tehran’s nuclear program.

Forecasters are split on the oil outlook, with the International Energy Agency saying in its most recent monthly report in December that “much-needed relief for tight markets is on the way.” The Energy Information Administration has forecast that oil prices will fall later this year.

Still, undershooting by countries like Nigeria and Angola has become the norm as their oil industries struggle. A variety of factors are causing production in some countries to fall short, including political turmoil, outmoded regulatory regimes and pressures on international oil companies to rethink their investments so as to bolster profits and reduce carbon emissions. That shift could leave developing countries that depend on oil income out in the cold.

“There are many basins that are simply of no interest anymore,” said Gerald Kepes, president of Competitive Energy Strategies, a consulting firm, referring to petroleum-bearing regions. In the eyes of international oil companies even a country like Nigeria, Africa’s largest producer, “doesn’t make the cut,” he added.

Oil industry giants for decades courted Nigeria, investing billions of dollars, but production has been slipping. In November the country was supposed to pump about 1.6 million barrels a day but missed that target by more than 300,000 barrels a day, according to the International Energy Agency.

A welter of problems lie behind the shortfall. Nigeria’s industry is plagued by damage to infrastructure caused by oil thieves and others, problems that have worsened in recent months, according to the industry.

International companies including Shell, which has long been a major investor in Nigeria, are gradually reducing their presence in swampy areas where their installations are vulnerable. They are being replaced by smaller companies with less capital to spend, analysts say.

The role of crude oil production. Gas prices have gone up in part because of fluctuations in supply and demand. Demand for oil fell early in the pandemic, so oil-producing nations cut production. But over the past year, demand for oil recovered far faster than production was restored, driving prices up.

Additional factors at play. The price of crude oil is only one element driving up gas prices. Compliance with renewable-fuel standards can contribute to the cost, the price of ethanol has increased, and labor shortages in the trucking industry have made it more expensive to deliver gas.

A global energy crunch. Other types of fuels, including natural gas and coal, are also growing more expensive. Natural gas prices have shot up more than 150 percent in recent months, threatening to raise prices of food, chemicals, plastic goods and heat this winter.

Without investment in drilling and technology, even the best-endowed oil states will see their output dwindle. A case in point is troubled Venezuela, where amid neglect of the industry production has shrunk to relatively minuscule levels of less than one million barrels a day — less than a tenth of Saudi Arabia’s output — despite claims to have the world’s largest reserves, about 300 billion barrels.

Kuwait, a wealthy Persian Gulf oil state, has seen its capacity to produce decline about 18 percent over three years. Kamel al-Harami, a Kuwaiti analyst, said that the domestic industry “does not have the experience and the expertise to deal with old and aged oil fields” but that public opinion is resistant to bringing in international companies.

Even Russia, which is roughly tied with Saudi Arabia as the leading producer in OPEC Plus, is close to the short-term limit of what it can produce, analysts say. Saudi Arabia, on the other hand, produces about 10 percent of the oil on the world’s market, and could produce more.

“Most OPEC producers are becoming capacity constrained,” said Bill Farren-Price, the director of intelligence at Enverus, an energy market research firm. “But Saudi Arabia is a different story — its appetite for active oil market management is undiminished,” he added.

Each month since the pandemic hit, OPEC Plus members have met to set output quotas. Following a schedule agreed to in July, the group plans to raise the overall output by 400,000 barrels a day each month, even though they are missing the targets.

Stung by gasoline prices that have risen about 40 percent in the last year, the White House has leaned on the Saudis and their allies to go faster in opening up the throttle, but OPEC officials have so far been unwilling to lower the quotas of those who aren’t able to hit targets and reassign them to other countries.

“We have to keep what they are allotted,” Prince Abdulaziz bin Salman, the Saudi oil minister, told journalists late last year. The alternative, he added, would be a monthly debate over “who gets what.”

Analysts say Saudi officials don’t want to unilaterally increase output and risk busting up the arrangement with other producers that gives them so much control. In addition, the lagging countries serve as a stealthy way to trim the cartel’s output, helping the Saudis enjoy high prices while increasing their own production.

And time may not be on the side of the Biden administration and others urging more oil on the markets. As producers reach the limits of what they can make in the coming months, “it is going to be less and less impactful to demand that OPEC add more,” Mr. Bronze said.

Business trends, risks and people to watch in 2022

Sat Jan 15 , 2022
The pandemic could end in 2022 — or we may suffer fresh setbacks. Operating with that huge global uncertainty, companies will record new triumphs and failures. This is what to look for next year across the corporate world in industries from pharma to technology. Pharma Trend to watch Next year […] 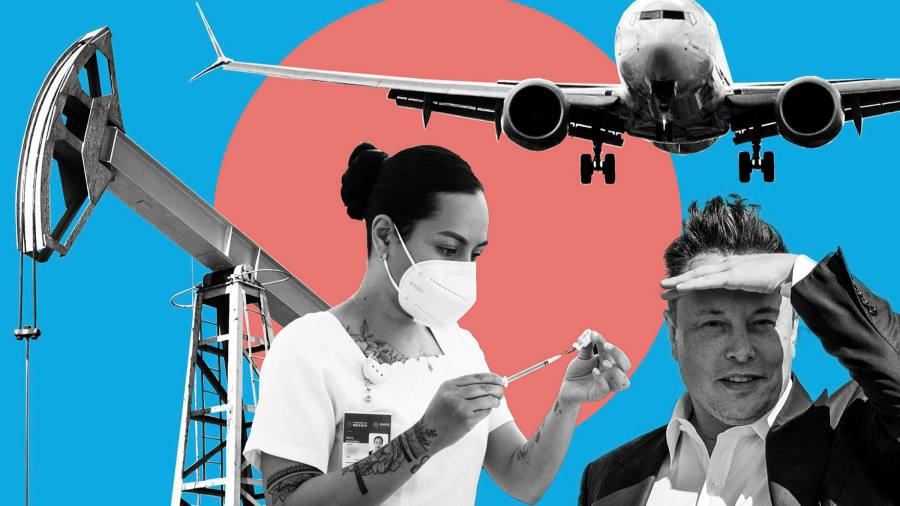