Mattel Barbie brand dolls are arranged for a photograph in Tiskilwa, Illinois, U.S., on Monday, April 16, 2018.

With its toy business on better footing, Mattel said Friday it is looking to further expand its presence into other segments like consumer products, digital gaming and filmmaking.

The toymaker hopes this strategy will allow it to tap into consumers’ enthusiasm for toys like Barbie, Hot Wheels and Uno, and deliver new ways for kids and adults to experience its brands.

“The first part of the turnaround was to restore and then improve profitability,” CEO Ynon Kreiz told CNBC in an interview. “Making sure the toy company is on solid foundation and strengthen our balance sheet. This has been the focus and we’ve always said the opportunity to capture full value was mid to long term.”

On Friday, Mattel laid out this new strategy in a pretaped presentation for analysts. It is a playbook that many others in and outside of the toy industry have used — take beloved franchises and make them available to consumers across multiple segments.

This strategy has been proven effective. Providing new entertainment content — like movies, television shows or video games — keeps the brand in the cultural zeitgeist, and helps fuel sales of a variety of items, from apparel to housewares.

Take Barbie. The dolls have been on toy shelves for more than 60 years, and yet the brand posted its best full-year sales results of all time in 2021.

“In the case of Barbie, which is our best and shining case study, it’s really about the limitless potential of every girl,” Richard Dickson, president and chief operating officer at Mattel, told CNBC. “We’ve embraced that brand purpose and really marked and managed the brand to truly reflect that in everything that we do.”

Five years ago, Mattel reevaluated its Barbie brand, launching figures with more than two dozen different ethnicities and with a wider range of body types. At the same time it introduced new lines of Barbie dolls that celebrated real women like actress Zendaya, animal activist Bindi Irwin and dancer Misty Copeland as well as offered more career paths in areas like science, politics and business.

Mattel seeks to continue innovating the Barbie brand by producing a live-action film starring Margot Robbie and helmed by Greta Gerwig. It also will continue to release animated Barbie specials and bring new, nontoy merchandise to stores and the digital realm.

It is a strategy rival Hasbro knows well, and one it has recently come under fire for employing.

Activist investor Alta Fox Capital Management, which owns a 2.5% stake in Hasbro, nominated five directors to Hasbro’s board and penned a letter to shareholders, which was distributed Thursday, urging Hasbro to spin off Wizards of the Coast and digital gaming, its fastest-growing segment, and asking the company to reevaluate its strategy of using entertainment to drive toys sales.

Notably, Hasbro owns and operates a studio and invests significantly in its entertainment productions. This is different from Mattel’s model of utilizing third-party studios and distributors to create content, but minimize financial risk.

Hasbro has balked at the notion that its current strategy is not working and, so too, have analysts. Also having the Wizards unit, which includes brands like Dungeons & Dragons and Magic: The Gathering, might actually help Hasbro weather the storm of losing the Disney princess license to Mattel, a lucrative license in the toy industry.

Mattel lost this license in 2016 and it left a huge hole in the company’s business portfolio that it has only recently been able to recover from.

Investors appear to be on board with what they have learned about Mattel’s strategy so far. Shares of the company are up more than 15% since the beginning of the year. On Thursday, the stock hit a 52-week high of $25.71, and the shares were down less than 1% in trading on Friday.

The average target price for Mattel’s stock is $30.96, which is about a 24% gain from where its currently trading, according to FactSet. Linda Bolton Weiser, an analyst at D.A. Davidson, is even more optimistic. She upgraded her price target to $45 from $38 on Monday, citing the potential for growth in the coming years.

Much of her optimism is due to Mattel’s updated sales predictions, which foresee growth of 8% to 10% in 2022, and a high single-digit pace the following year.

This robust forecast comes on the heels of a four-year turnaround that started when Kreiz took the helm in 2018. At that time, he was the fourth CEO in four years to assume control of the company. Fisher-Price, Barbie and American Girl were struggling to connect with changing consumer tastes and Mattel, more than most toy companies, was reeling from the bankruptcy of Toys R Us.

Heading into 2022, Mattel is on stronger financial footing. It has reduced its debt from $2.85 billion in 2018 to $2.57 billion in 2021. With an improved debt-to-adjusted EBITDA ratio, Kreiz expects Mattel will be able to achieve an investment-grade rating this year, which will give it access to more credit at lower costs.

Mattel’s outlook relies on expected sales gains at its toy business, but its post-turnaround strategy will also contribute.

Already, the toy company has seen success partnering with French fashion house Balmain to create a ready-to-wear fashion and accessories collection and it put up three one-of-a-kind Barbie nonfungible tokens at auction.

In the past, Mattel has partnered with General Mills, L’Oreal and Nike to produce limited-edition products based on its intellectual properties. Kreiz said the company plans to delve deeper into this market going forward. It is also looking at opportunities to have immersive brand experiences within retail locations.

In addition to driving revenue, the strategy complements its toy offerings as it provides a new way for consumers to engage with Mattel’s brands.

Digital entertainment — including video games, mobile games and NFTs — are another opportunity.

Mattel’s team notes that digital gaming alone represents a $170 billion industry and it is a space that the company has only just begun to explore. Mattel already has mobile games centered around Uno and Phase 10 as well as a racing video game, Hot Wheels Unleashed, but is looking to expand this area of its business.

Rival Hasbro has seen significant upside in launching digital games like Magic: The Gathering Arena. In 2021, the company’s Wizards of the Coast and digital gaming unit accounted for $1.28 billion in sales, or 20% of the company’s total revenue.

Mattel is also dabbling in the NFT space.

“It does represent a significant opportunity to drive what I would call high-level engagement to our iconic brands,” Dickson said. “I think what makes us unique in the NFT space is that we are globally recognized, iconic brands that with the right interpretation and execution can become incredibly exciting and incredibly valuable.”

Hot Wheels was the first major toy brand to expand into the world of NFTs with three one-of-a-kind tokens that were inspired by the original Hot Wheels garage series, a highly sought after subset of vehicles for collectors. Another collection, which included more than 90,000 NFTs, sold out in minutes, Dickson said, with tens of thousands of customers still waiting in virtual queues to buy them.

In exploring these other segments, Mattel is able to not only generate excitement for its core customers, kids, but also reach older generations. By targeting consumers who grew up with Barbie, but aren’t interested in buying traditional noncollectable dolls, Mattel is able to continue to keep the brand in the mainstream and add urgency to purchases with exclusive and limited-edition items.

Notably, while Mattel established its film division in 2018, it won’t release a feature-length film in theaters until 2023.

This year, the company is beginning production on its Barbie film with Warner Bros. and a Masters of the Universe film with Netflix. There are a dozen more projects in development, including films based on Hot Wheels, Magic 8 Ball, Major Matt Mason, Rock ‘Em Sock ‘Em Robots, Uno and Barney.

The strategy for its fledgling film division is to lean on third-party companies to finance each project and partner with a studio and distributor. That strategy helps to mitigate the company’s financial risk. But, that doesn’t mean that Mattel is hands off when it comes to these projects.

“We are involved creatively so we can make sure the DNA and brand attributes and values are there,” Kreiz said. “We are not film distributors or film financiers, but we are working with the best.”

Kreiz has more than two decades of experience in the media and entertainment industries, particularly children’s entertainment. He is former CEO and chairman of Maker Studios, which was sold to Disney in 2014. Before that he was chairman and CEO of Endemol Group, one of the world’s largest independent television production companies.

Additionally, Mattel will have more than a dozen series and specials on networks or on streaming services this year. It has more than 20 television projects in production and around 25 in development, Kreiz said.

“This opportunity is not done to sell more toys,” he said. “When we launch a movie or make a TV show, the mandate is to make great content that people want to watch and build accretive verticals that are successful so we can attract the best talent, the best creatives and partners that want to make special experiences.”

“We know that if this project is successful, good things will happen,” he said. “We will also sell more toys, but it’s not the initial goal. We want to make great experiences and content that people want to watch.”

Kreiz pointed to Lego and Disney’s Marvel as examples of companies who have followed similar paths to create quality content that reimagines the source brand and rejuvenates consumer passion for products. In addition to making critically acclaimed films that have thrived at the box office, Disney and Lego have seen strong merchandise sales as a result of these projects.

So far, Mattel’s projects are touting some pretty big talent, like Tom Hanks for the Major Matt Mason movie and Vin Diesel for the Rock ‘Em Sock ‘Em Robots project.

“These are partners who used to be fans [of Mattel’s brands],” he said.

The Taliban Have Staffing Issues. They Are Looking for Help in Pakistan.

Sat Feb 19 , 2022
KARACHI, Pakistan — It was 20 years ago when the jihadi, a defense ministry official in the Taliban’s first government, fled Afghanistan as U.S. troops swept into the country. He settled in southwestern Pakistan with other Afghans, bought a house and became a baker. Then, after Kabul fell to the […] 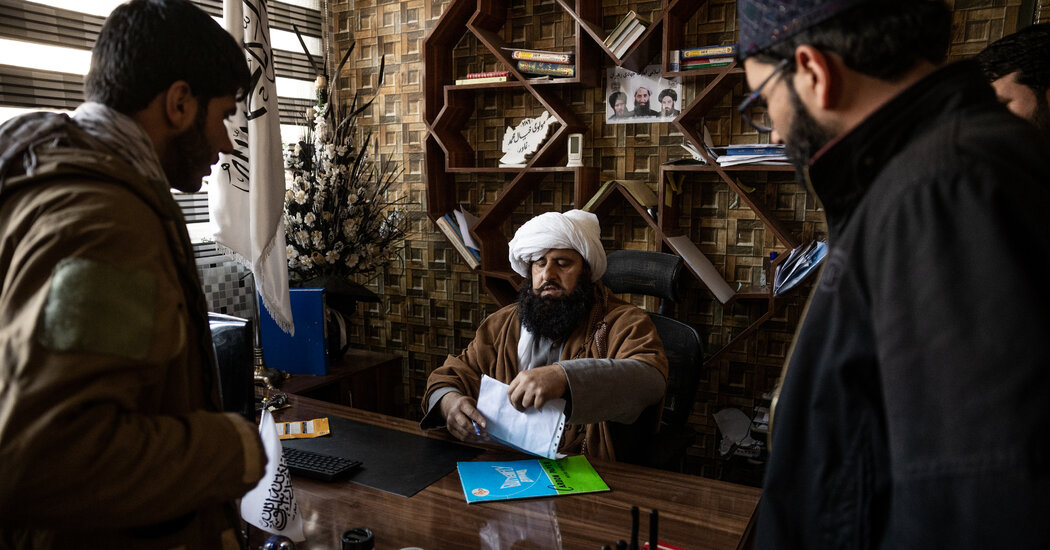