WASHINGTON, April 19 (Reuters) – The International Monetary Fund’s new chief economist said on Tuesday he is concerned about increasing signals that inflation expectations are on the rise and may become entrenched at elevated levels, prompting more aggressive monetary policy tightening in advanced economies.

Pierre-Olivier Gourinchas, who started transitioning to the IMF’s economic counselor role in January, told Reuters in an interview that the war in Ukraine, which has caused sharp energy and food price increases, may damage expectations for decades-high inflation to start to subside this year.

A “very, very tight labor market” in the United States is increasing demands for wage increases to “catch up” with higher prices that could help fuel expectations among consumers and businesses that prices will keep rising, the French-born former University of California-Berkeley economist said.

“So there is definitely a risk that we could have a wage-price spiral,” Gourinchas said. “And there’s a risk also that as we live through a period of elevated inflation, and we hear that it goes from five to six to seven to eight (percent) – and we don’t see it turning around – people will start reassessing what they think inflation will be in the future and businesses will also do the same thing.”

That would be bad news for the Federal Reserve and other developed-world central banks, which have argued that inflation expectations among consumers and businesses have remained reasonably anchored at levels well below the current high readings of measured inflation.

Some Fed officials have begun to fret publicly that they may have a limited window now to ensure that that remains the case and an aggressive run of rate hikes this year is needed to pull that off. read more

Market signals from elevated Treasury yields have been ahead of consensus private forecasts for inflation, but both are pointing higher than the 2% inflation targets of many central banks, and forecasts have been “sort of moving up,” Gourinchas said.

“And that’s really, you know, the red alarm signal on the dashboard here,” he said. “If you see that and you’re a central banker, you don’t have a choice. You have to step in more forcefully to make sure people really anticipate that inflation will remain stable, even if it’s elevated right now.”

The duration of elevated inflation readings is a downside risk for the United States and some other advanced economies.

“If inflation remains elevated for more than just a couple more months, if it keeps drifting upwards, we see these wage pressures building, we see these inflation expectations drifting more permanently and in particular the consensus forecast, then I think we would see a much more aggressive tightening of monetary policy going forward.”

Earlier on Tuesday, the IMF revised down its global economic growth outlook by nearly a percentage point from January due to shocks from Russia’s war in Ukraine, with significant downside risks from tighter sanctions. It called inflation “a clear and present danger” for many countries. read more

Gourinchas said the Fund’s baseline forecast anticipated that inflation will peak in the current quarter and start to decline as pandemic-driven supply chain bottlenecks ease and the withdrawal of pandemic fiscal support helps cool demand.

But while a faster tightening of U.S. monetary policy would slow U.S. growth further, it would be unlikely to cause a recession, based on the current baseline of still-robust 3.7% U.S. growth for 2022, Gourinchas said.

Steeper rate hikes, energy sanctions on Russia that spike prices further or a big drop in asset prices that stokes volatility could “bring us closer” to recession, he said.

“How close we could be, that’s not something we can assess precisely at this point. Our baseline is basically the U.S. economy is still going to be growing in 2022 and 2023,” Gourinchas said.

On China, he said recent data showed that its slowdown caused by renewed COVID-19 lockdowns may be a steeper than in the IMF’s baseline, but the Chinese government had room for more monetary and fiscal stimulus actions to counteract these trends.

Wed Apr 20 , 2022
Paul Zimmerman/Getty Images Entertainment Virtu Financial (NASDAQ:VIRT) is an interesting company. It’s not that old, not much of a history to the stock or its dividend, but it’s come far in a very short time. An investment in Virtu would have mostly kept pace lock-step with the market, at 8-year […] 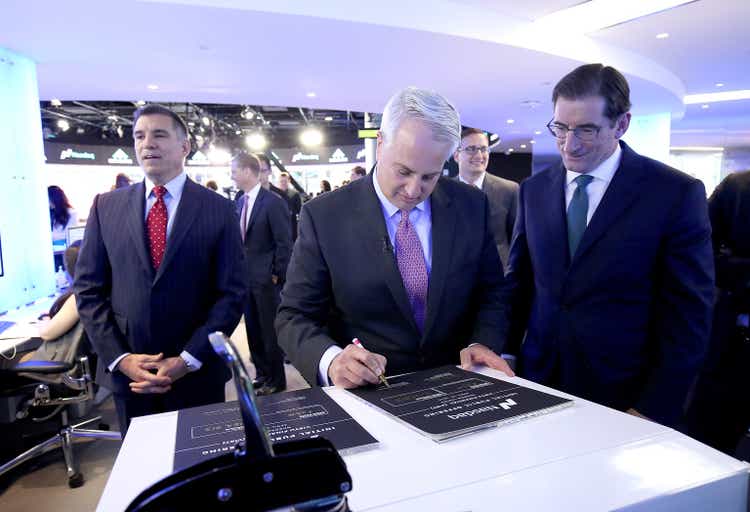