For much of the last decade, Puma was in limbo, too small to compete with Nike and Adidas, too big to fend off new, niche rivals. Its signature product was a pair of casual suede sneakers — neither fashion-forward nor athletic.

But the German activewear brand may have finally found its place in the market.

In the first quarter of 2022, Puma saw sales increase 19.7 percent to €1.9 billion ($2 billion), the company reported Wednesday, continuing a growth streak that outperformed both Nike and Adidas in their respective fiscal 2021 years.

“This was Puma’s best-ever performing quarter, both in terms of revenue and EBIT [earnings before interest and taxes],” chief executive Bjørn Gulden told analysts on the company’s earnings call.

The strategy: rather than compete with Nike and Adidas head-on, Puma went where the sportswear giants didn’t. As Nike and Adidas pulled back from wholesale to focus on their direct channels, Puma swooped in, bulking up its partnerships with multi-brand retailers in North America. It invested in underserved sports like motorsports and cricket, where the category’s giants aren’t as big a presence, partnering with Indian cricketer Virat Kohli and chess world champion Magnus Carlsen to reach new groups of consumers.

Improving Puma’s technical sportswear — also known as performance — offering has been central to its turnaround. Its fastest-growing categories, basketball and running shoes, were reintroduced by the brand in the last four years, and have been key drivers in Puma’s breakthrough in North America, according to Gulden.

“Puma has turned things around since five years ago, when they couldn’t have been described as a performance brand,” said Matt Powell, an analyst and sportswear expert with the NPD Group.

The big opportunity for Puma came in 2020, when Nike began pulling its shoes from wholesale retailers around the world. Nike expects direct-to-consumer sales to account for 60 percent of its total revenue by 2025, up from 39 percent in 2021, according to data analysed by McKinsey & Company.

Suddenly, there were thousands of stores, ranging from mom-and-pop retailers to big chains like DSW and Urban Outfitters that needed a well-known brand to serve their customers, and Puma seized the moment.

In the first quarter of 2022, Puma’s wholesale business increased by 23.3 percent compared to the same period last year, up from €1.2 billion ($1.3 billion) to €1.5 billion, which accounts for roughly 79 percent of total sales.

“Where [Nike and Adidas] are vacating department stores, online retailers and physical retailers, these businesses now have shelf space to fill,” said Deutsche Bank analyst Adam Cochrane. “Puma is taking on these wholesale contracts and filling more of the space.”

Puma’s sales have also benefited from reduced competition at these retailers, and the brand was able to sell more products at full price, with less discounting, according to Deutsche Bank analysis. Puma’s wholesale segment is especially strong in the Americas region, where its first-quarter revenue rose 44 percent compared to the same period in 2021.

A renewed emphasis on technical apparel and footwear designed for specific sports is also key to Puma’s growth. Its successful re-entry into the basketball category in 2018 after a 20-year absence, for instance, has boosted sales in Europe and North America, mitigating challenges such as global supply chain disruptions and declining sales in Asia, according to a Deutsche Bank report on Tuesday.

Gulden, a former professional footballer, began his tenure as Puma’s CEO in 2013 by re-evaluating its product offering. The emphasis shifted toward performance-oriented products that also showcase fashion chops, such as the brand’s foam-soled ‘Nitro’ running shoe line, which resembles a contemporary sneaker collection and is successfully winning over consumers and athletes alike.

“For example, [Puma’s] running products are both technical and trend-right, and the quality of its basketball product has allowed it to grow its market share,” said Powell.

Since its return to basketball, a growing number of NBA and WNBA players, including LaMelo Ball and Breanna Stewart, now wear Puma shoes during games.

Puma is also building its reputation as a performance brand through partnerships with winning athletes in niche sports, including Formula 1, cricket and Nascar racing — fields where Adidas, Nike and Under Armour have little presence. Brand ambassadors include Dutch Formula 1 driver Max Verstappen, the Mercedes AMG team, who won the 2021 competition overall, and Indian cricket legend Virat Kohli — a hugely popular figure in India, with over 240 million followers across Instagram and Twitter. Puma also recently signed world chess champion and internet sensation Magnus Carlsen to a long-term endorsement deal.

All the while, Puma retains big-ticket names in popular sports, such as Usain Bolt, who has been signed to the brand since 2003, Lewis Hamilton and Neymar Jr, the revered Brazilian footballer.

Puma’s partnerships across fashion and culture have allowed the brand to stay relevant in the lives of its consumers, according to Cochrane. A sell-out collaboration with Fenty in 2015 proved Puma could stir up some buzz within fashion too.

In March, the German sportswear giant partnered with popular Parisian fashion label Ami to create a range of elevated sportswear, carried by fashion-forward retailers such as End Clothing, and modelled by Romeo Beckham in a high profile campaign.

Puma’s ongoing partnership with British model Cara Delevingne, meanwhile, allows it to reach a younger, more fashion-forward consumer. Last week, the brand announced that Delevingne will be taking part in the company’s RE:SUEDE programme, which will create a biodegradable version of their most iconic shoe. In the music scene, Puma signed Davido, a high profile Nigerian artist, to grow brand visibility among consumers in sub-Saharan Africa.

“Puma is starting to link relevant pop culture to their products, and this has been reinforced by the brand’s sporting credentials,” Cochrane said.

Thu Apr 28 , 2022
Archegos Capital Management’s owner, Bill Hwang, and its former chief financial officer, Patrick Halligan, pleaded not guilty Wednesday to criminal charges filed against them in connection with the implosion of the family office last year. The men were arrested Wednesday morning and appeared in Manhattan federal court that afternoon. They […] 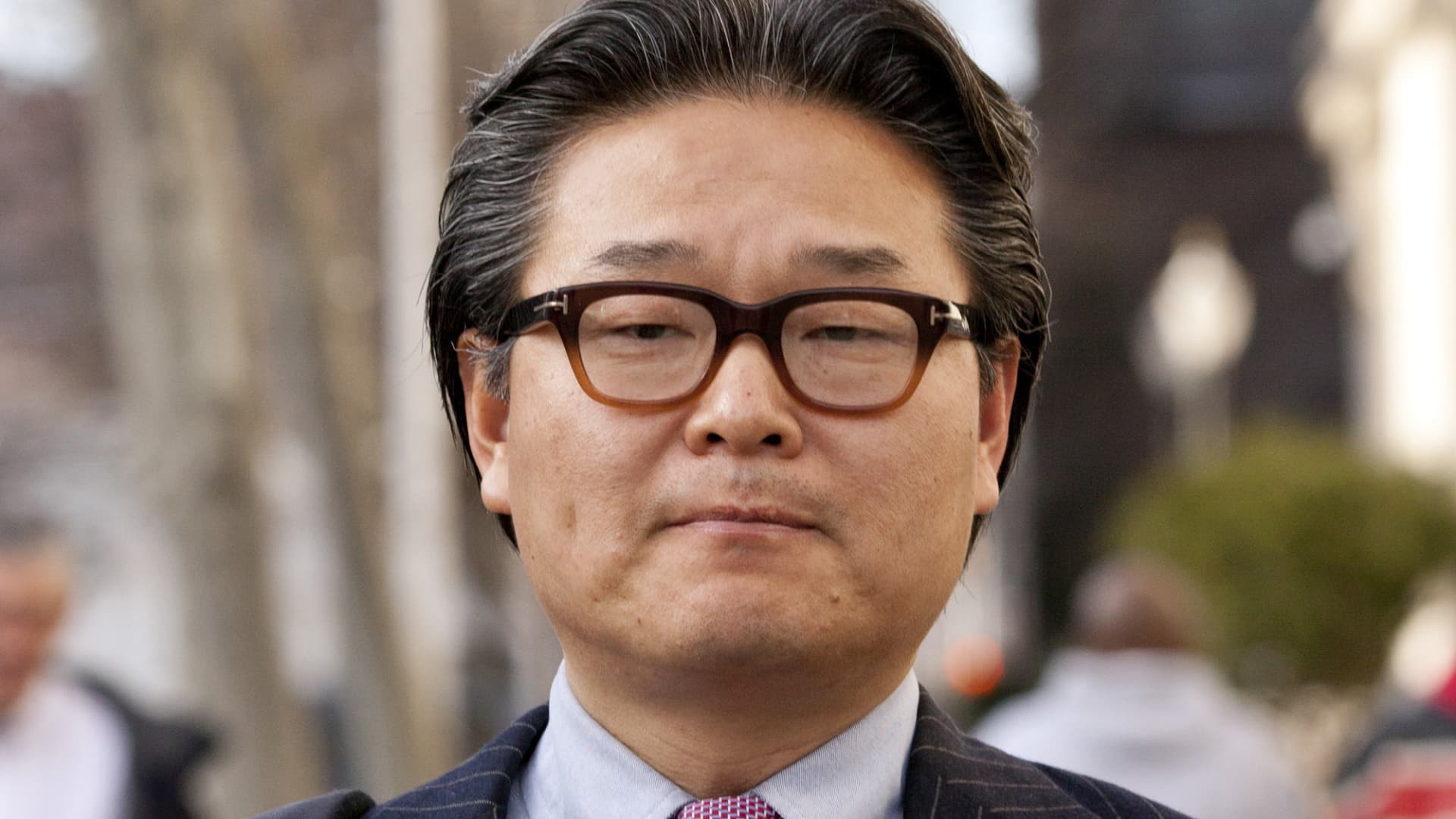