The Facebook and Instagram logos displayed on a smartphone with the Meta Platforms logo pictured in the background.

Anne Boden, Starling’s CEO and founder, said her firm would no longer pay for advertising on Facebook and Instagram while scammers were targeting its customers.

In an annual letter published Thursday, Boden said: “We want to protect our customers and our brand integrity. And we can no longer pay to advertise on a platform alongside scammers who are going after the savings of our customers and those of other banks.”

Boden has been pressuring the U.K. government to address financial fraud in the Online Safety Bill, a sweeping set of legislation that seeks to tackle the spread of harmful content on digital platforms.

The Online Safety Bill would place a duty of care on Big Tech companies such as Meta and Google, requiring them to take action against harmful and illegal material. Companies that fail to do so would risk facing penalties of £18 million ($24 million) or 10% of their annual global revenues, whichever amount is higher.

Last month, a committee of lawmakers scrutinizing the bill recommended that the new legislation should cover scam ads. The U.K.’s Financial Conduct Authority has previously raised the alarm about adverts promoting investment scams. These include cryptocurrency scammers using the images of celebrities to defraud consumers, for example.

In August, Google stopped accepting ads for financial services unless the advertiser was authorized by the FCA, or qualified for certain exemptions. Meta in December made a commitment to tighten its policies on financial advertising, however the firm is yet to implement these changes. Meta says it expects to do so later this year.

“Promoting financial scams is against our policies and we’re dedicating significant resources to tackling this industry-wide issue on and off our platforms,” a Meta spokesperson told CNBC.

“To fight this, we work not just to detect and reject scam ads on our services, but also block advertisers. While no enforcement is perfect, we continue to invest in new technologies and methods to protect people on our service from these scams.”

Meta already has policies banning promotion of financial fraud, such as loan scams and schemes that promise high rates of returns. And the company says it prohibits ads that promise unrealistic results or guarantee a financial return.

Boden also took aim at Facebook’s rebrand to Meta and its pivot to the so-called “metaverse,” a shared virtual reality in which users can interact with each other.

“When I read that Facebook’s next big project, the Metaverse, is predicted to be the key driver of the growth of finance and DeFi (Decentralised Finance) in the 2020s and beyond, I know that this is likely to be both wrong and right,” she said, citing an attempt by one bank to give its customers advice in the much-hyped virtual world Second Life.

Second Life, which failed to take off in a big way, is now viewed by some as a precursor to the metaverse.

“While Facebook (Meta) may hold out all sorts of promises for the future, I really hope its focus on the Metaverse doesn’t become a distraction from doing what is right today, here and now in the UK of 2022,” Boden added.

Founded in 2014, Starling has become one of the U.K.’s largest digital banking brands, with a customer base of 2.7 million. With 475,000 business accounts, the firm also controls a 7% share of the U.K.’s business banking market.

The bank counts Goldman Sachs, the Qatar Investment Authority and Fidelity as investors, and was last valued at $1.5 billion. Its competitors include the likes of Revolut and Monzo, which were last privately valued at $33 billion and $4.5 billion, respectively.

Boden’s attempt to pressure Meta into taking action against online fraud follows mass boycotts from major brands, which temporarily paused advertising on Facebook in 2020 for not doing enough to censor hate speech.

Sun Jan 9 , 2022
Green Wednesday and Black Friday, the days before and after Thanksgiving, were the second and third highest-grossing days for the cannabis industry, with nearly $100 million in sales each. DENVER, Dec. 2, 2021 /PRNewswire/ — Business intelligence from Akerna (Nasdaq: KERN), a leading enterprise software company and the developer of […] 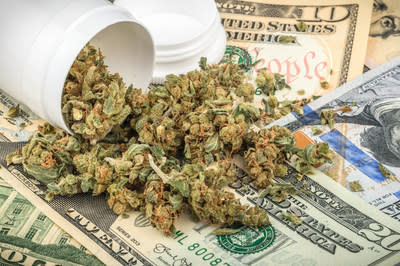