Supply chain woes — ensnaring goods from around the world and adding to inflationary pressures as consumers and companies scramble to find scarce products — are slowly receding just ahead of Christmas.

At bottlenecked West Coast shipping hubs that have played host to countless cargo ships, port officials note that dock workers and terminal operators have moved nearly 9 million containers, half a million more than they will have processed in all 12 months in the year 2020.

Shoppers are still having a hard time finding goods, and companies are still struggling to meet soaring COVID-19 era demand. But at a press conference on Thursday, Mario Cordero, executive director of the Port of Long Beach insisted there are “some signs of improvement” in addressing the holiday backlog.

“As of [Thursday] morning, there are 74 container ships on their way to the San Pedro Bay Port complex. Just off the coast, there are 28 container ships waiting at anchor. This is down from 86, just three weeks ago,” Cordero said.

Cordero said that congestion at the twin ports of Long Beach and Los Angeles, which account for 40% of sea freight entering the United States, was a “temporary” situation, and part of the “domino effect” of the coronavirus.

“You’ll see some normalcy in the supply chain, in my opinion, summer of 2022,” the port executive added.

The number of container ships at anchor, or loitering within 40 miles of the ports, have improved due to the new queuing system which encourages ships to wait outside of a specially designated Safety and Air Quality Area (SAQA). That zone extends 150 miles to the west of the ports, and 50 miles to the north and South.

But other measures have found the bottlenecks still persist. According to data cited by trade outlet American Shipper, the actual tally of ships waiting outside L.A. and Long Beach hit an all-time high of 96 in early December, with 56 of those waiting outside the 40-mile zone.

The congestion at California’s ports is “a bit of a mixed story,” with bottlenecks still an issue amid some thawing.

“The situation on the ground is improving, but on the water it’s not yet improving,” Sanne Manders, COO of Flexport, told Yahoo Finance Live last week. “The front end of the traffic jam starts driving, where the back end is still backing up.”

Separately, figures from Marine Exchange of Southern California show there were 113 container ships waiting inside the 40-mile zone as of Wednesday. And Flexport’s Ocean Timeliness Indicator (OTI), which measures from the point of production to the destination port, showed travel times hit a record high of 112 days last week — caused by longer times taken for ocean vessels shipping from Asia to Europe.

Trans-Pacific Eastbound, China-to-US routes, jumped to 106 days, based on the time taken to ship cargo to the Asian ports, Flexport found.

Meanwhile, there have been massive delays at ports like Savannah, Georgia to Newark, New Jersey — and in Britain, the Netherlands, and China, with roughly six hundred cargo ships globally left waiting to unload at one point last month.

Amid the delays, California port officials have postponed a plan to slap fines on abandoned containers that have become an eyesore for residents.

The “Container Dwell Fee” has helped expedite containers from the terminals across the port complex, but Cordero said officials will monitor the situation and reassess implementation as early as Monday. Since the October announcement of the new fee, the ports have seen a cumulative 47% decline in the amount of aging cargo on their docks.

“We are also evacuating empty containers from our terminals. Empty containers account for about 36% of all containers on the terminals – this is down from 45%, just a couple weeks ago,” Cordero said on Thursday. “We are not out of the woods yet, but we are making meaningful progress.”

The fees came on the heels of the Biden Administration’s plan to establish around-the-clock operations at the L.A.-Long Beach hubs to ease pressure on the supply chain bottlenecks, but only one of seven container terminals at the port of LA has actually met the goal.

Retailers with ‘clout’ make their own way

Meanwhile, individual major retail companies are taking measures into their own hands to bring products to the U.S. from overseas factories. Several retailers, including Walmart (WMT), The Home Depot (HD), and Target (TGT) and Ikea, have charted cargo ships to alleviate supply chain burdens on their own.

“The reality is also there’s not much that you can do. There isn’t like all of a sudden armies of truckers coming from anywhere else in the country to help these big retailers out,” he added.

Still, small businesses hope this season will provide a needed boost to business, with many battered by worker shortages, surging prices and a lack of needed goods.

“Supply chain challenges will be with us for the foreseeable future across a number of sectors,” Clara Shih, CEO of Salesforce Service Cloud, said in a statement.

“These challenges have a massive impact on customer experience, which will only be more pronounced during the holiday season. Every company should be anticipating and proactively communicating with customers right now; otherwise, they will lose customer trust,” Shih added.

In another effort to ease congestion, Long Beach announced Thursday a new data initiative to provide transparency for supply chain participants, which is targeting a February 2022 launch.

Called “Supply Chain Information Highway,” the project is meant to share data among participants “so that cargo can be delivered more reliably and efficiently,” according to Noel Hacegaba, deputy executive director at the Port of Long Beach, told a press conference on Thursday.

The crisis has spurred more than half of manufacturers to make significant changes across their supply chains, according to Oden’s 2021 State of Manufacturing report. Industries like autos have started to re-shore or ‘nearshore‘, scaling down production to be closer to customers, but even those efforts come with challenges.

“Asia has taken over all the [intellectual property] on how to manufacture goods, so it’s not that easy to all of a sudden say ‘like, oh yeah, let’s do it then at home,’” Flexport’s Manders said.

Is the Stock Market Open Today? These Are the Martin Luther King Jr. Day 2022 Hours.

Mon Jan 24 , 2022
Text size Traders work on the floor of the New York Stock Exchange. Spencer Platt/Getty Images Investors looking for a brief respite from two weeks of volatile trading on Wall Street may get one on Monday, when Martin Luther King Jr. Day is observed this year. The markets have had […] 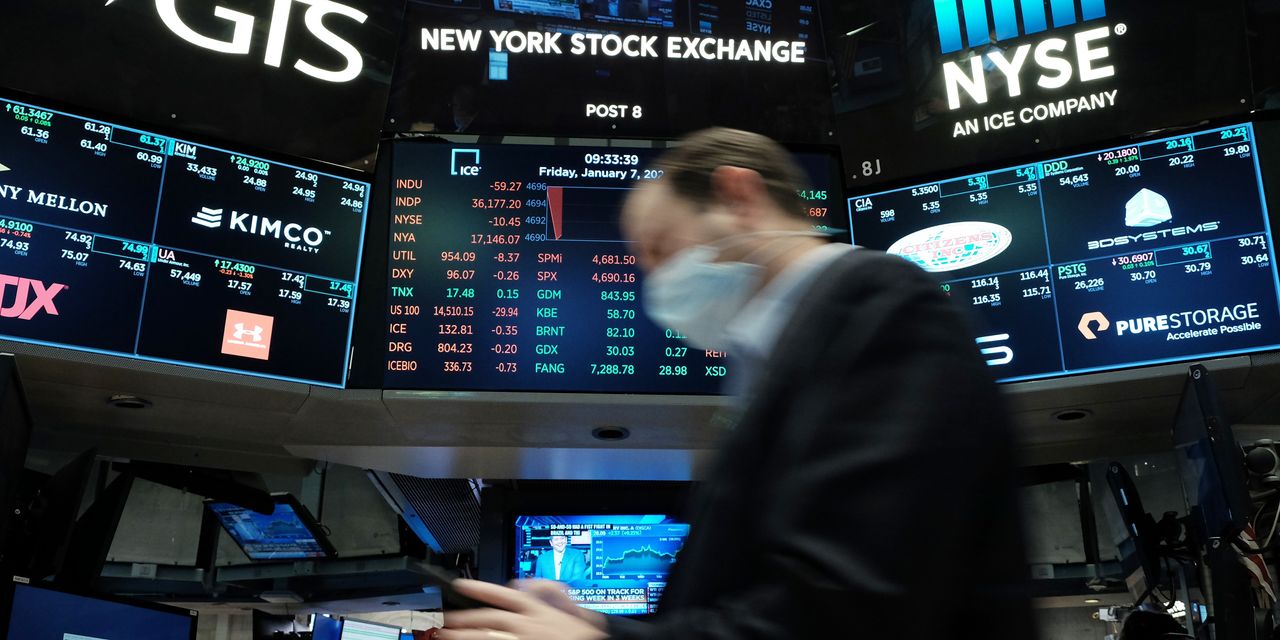