Environmentalists say Bitcoin uses too much energy. The world can’t afford it. It’s not worth it. That’s what they say. So, it must be true. Or must it? If you’re reading this, you’re probably aware of the popular anti-Bitcoin “energy per transaction” narrative. You’ve seen it in many major media publications. It goes something like this:

“According to Digiconomist, a single bitcoin transaction uses the same amount of power that the average American household consumes in a month — which equals roughly a million times more in carbon emissions than a single credit card transaction. And globally, the carbon footprint of bitcoin mining is greater than that of the United Arab Emirates and falls just below the Netherlands.”

–”Environmentalists Sound Alarm At US Politicians’ Embrace Of Cryptocurrency,” The Guardian

The Bitcoin network does indeed use a lot of power to provide permissionless security and, in order to preserve minority user rights, that power is extremely efficient. However Digiconomist’s “energy per transaction” metric, which compares Bitcoin to retail payment providers and is often used in the media, is an invalid comparison. Journalists and columnists are popularizing an intellectually dishonest metric that is misleading at best and a state-sponsored attack at worst.

“Energy Per Transaction” Is Misleading

“The popular ‘energy cost per transaction’ metric is regularly featured in the media and other academic studies despite having multiple issues.

“Second, a single Bitcoin transaction can contain hidden semantics that may not be immediately visible nor intelligible to observers. For instance, one transaction can include hundreds of payments to individual addresses, settle second-layer network payments (e.g. opening and closing channels in the Lightning network), or potentially represent billions of timestamped data points using open protocols such as OpenTimestamps.”

The confusion stems from the fact that Bitcoin is a final “cash” settlement layer without the need for a trusted party. High-performance retail payments networks, like PayPal or Visa, do not offer final settlement between banks — they are credit-based systems that rely on a monetary base layer of central banks, which are backed by militaries, for final and irreversible settlement. In fact all legacy retail payments systems, including traditional banking, are layered in this manner.

“This isn’t just speculative. It’s happening today. As Fedwire’s 800,000 or so daily transactions reveal little about the total payments volume supported by the network, Bitcoin’s 300,000 daily transactions and 950,000 outputs do not tell the whole story.”

If one wants to accurately compare payment systems, the media and academics should be comparing Bitcoin to the transactions of central bank RTGS systems — and include the impact of the militaries and institutions that legitimize them. Bitcoin is most accurately compared to Fedwire in the United States and TARGET2 (the successor to TARGET) in the Eurosystem. Retail payment systems can and will plug into Bitcoin the same way they do with permissioned state-sponsored systems.

This brings us to where the “energy per transaction” metric originates and why it has the appearance of a state-sponsored attack on Bitcoin, that the media seems all too eager to propagate. The “energy per transaction” metric was devised by Alex de Vries, an employee of De Nederlandsche Bank (DNB) — otherwise known as the Dutch Central Bank. De Vries publishes the Digiconomist website. De Vries’s work for DNB focuses on financial economic crime.

As such, de Vries is effectively a paid opposition researcher for a central bank RTGS system that competes with Bitcoin. It’s no wonder that de Vries and his employer would be antagonists of Bitcoin — his institution’s future depends on Bitcoin not succeeding. Neither he, nor many of the journalists that cite him, regularly disclose this conflict of interest.

De Vries first formed a relationship with the Dutch Central Bank in June of 2016, when he spent a year there as a data scientist. At the time, his Digiconomist website did not cover Bitcoin’s environmental impact in depth.

On November 26, 2016, halfway through his one-year employment with DNB, de Vries introduced his “Bitcoin Energy Consumption Index” as a new section on his website and included his discredited “energy per transaction” metric. The timing of this publication gives the appearance that the Dutch Central Bank possibly supported de Vries’s anti-Bitcoin agenda.

In 2017, de Vries left DNB for PricewaterhouseCoopers (PWC), where he worked for five years while he continued his attacks on Bitcoin. In November 2020, de Vries was rehired by the Dutch Central Bank as a data scientist in its financial economic crime unit.

Within three months of de Vries’s rehiring at DNB, his deceptive “energy per transaction” metric suddenly gained worldwide notoriety and was cited in nearly every anti-bitcoin article and op-ed in the mainstream media. Again, the timing is particularly suspicious.

By March, Bill Gates had repeated de Vries’s claims, which were then echoed by the media. A few weeks later, Elon Musk declared that Tesla would no longer accept bitcoin as payment for vehicles, citing the same specious arguments. Few seemed to notice that de Vries published inaccurate and easily refuted data at this time.

How does a newly rehired data scientist at DNB have the time, resources and PR savvy to be featured and interviewed in nearly every major mainstream media publication throughout the world? One might wonder if DNB was perhaps actively supporting de Vries’s worldwide media tour.

It should not be surprising that central banks and their legacy RTGS systems are threatened by Bitcoin as a neutral and open global settlement layer. Their brilliant plan looks to be paying people like de Vries to embellish the environmental impact of Bitcoin to unsuspecting readers. It’s unethical for the media to be citing his work without disclosing his financial ties to DNB.

De Vries uses a number of eye-popping statistics to shock readers, such as making comparisons of Bitcoin’s emissions to small countries. This too is misleading, as small countries tend to have very small energy footprints, since they typically outsource the bulk of their energy-intensive manufacturing to other countries, such as China.

It should be noted that Cambridge University considers such comparisons to be an exercise in presenter bias:

“Comparisons tend to be subjective — one can make a number appear small or large depending on what it is compared to. Without additional context, unsuspecting readers may be drawn to a specific conclusion that either understates or overstates the real magnitude and scale. For instance, contrasting Bitcoin’s electricity expenditure with the yearly footprint of entire countries with millions of inhabitants gives rise to concerns about Bitcoin’s energy hunger spiraling out of control. On the other hand, these concerns may, at least to some extent, be reduced upon learning that certain cities or metropolitan areas in developed countries are operating at similar levels.”

Direct comparisons to unrelated activities provides an incomplete picture. A more accurate comparison would be to contrast Bitcoin with other industries.

For those looking for a more in-depth debunking of de Vries’s arguments, listen to the debate between financial analyst Lyn Alden and de Vries. An informal poll taken before and after the debate shows Alden dramatically shifted the opinions of listeners from skepticism to a pro-Bitcoin stance. De Vries’s arguments did not hold up to scrutiny.

In June 2021, de Vries published a paper that concluded, “Therefore, the total carbon footprint of Bitcoin could be allocated proportionally among investors.” The problem is that de Vries also continues to promote his “energy per transaction” metric where the total carbon footprint is 100% attributed to transactions. De Vries is 100% double counting Bitcoin’s emissions from investors and miners. An easy way for him to fix this would be to withdraw his flawed “energy per transaction” metric or create a more coherent model that divides up the impacts.

There is no reliable evidence that Bitcoin’s carbon footprint directly contributes to climate change. A simple thought experiment illustrates why its impact cannot be more than anything more than a rounding error:

“What would be Bitcoin’s environmental footprint assuming the absolute worst case? For this experiment, let’s use the annualised power consumption estimate from CBECI as of July 13th, 2021, which corresponds to roughly 70 TWh. Let’s also assume that all this energy comes exclusively from coal (the most-polluting fossil fuel) and is generated in one of the world’s least efficient coal-fired power plants (the now-decommissioned Hazelwood Power Station in Victoria, Australia). In this worst-case scenario, the Bitcoin network would be responsible for about 111 Mt (million metric tons) of carbon dioxide emission, accounting for roughly 0.35% of the world’s total yearly emissions.”

In reality, Bitcoin’s footprint is approximately 0.13% of total global emissions — again, it’s a rounding error. If one is genuinely concerned for the environment it is a complete waste of one’s time to worry about Bitcoin and other rounding errors.

When de Vries promotes his exaggerated comparisons and double-accounting methodology he is distracting the public from genuine environmental issues. It’s a distraction perpetuated by central banks, politicians and the media outlets that do their bidding. Eliminating Bitcoin would do absolutely nothing to help the environment — its emissions are simply too tiny to have any meaningful impact. One might deduce that the only people who would be motivated enough to tell you otherwise have legacy institutions to protect and aren’t actually concerned about the environment.

Your Energy, Your Business

Bitcoin provides real utility to its users and consumes considerably less energy than clothes dryers in the U.S. alone. Yet, when was the last time high-profile worldwide media coverage was consistently devoted to describing clothes dryers as an environmental disaster? It’s never happened. It would be absurd. How you choose to spend your energy is your business.

The fact that people derive value and convenience from clothes dryers and are willing buyers of the energy to power them — instead of line-drying their clothes for free — is all anyone needs to know.

If the energy usage to power Bitcoin were not efficient, the cost of transactions would rise and would automatically deter users from the technology. Someone who owns no bitcoin may not find value in its monetary properties, but there are millions of people around the world who own it and depend on its value — not only as a store of value but to support human rights. Meanwhile, Bitcoin is already dematerializing aspects of the legacy financial industry.

As a tool that can empower billions of people, the energy consumption of Bitcoin could be not only justified but highly desirable when it is leveraged to provide robust security for an inclusive global monetary network. The power and hidden costs to protect the world’s fiat monetary system is far better spent in cyberspace with less bloodshed. Moving our money to a Bitcoin standard is how we unsubscribe from the legacy system and evolve towards more peace and energy abundance. The energy Bitcoin consumes is worth every watt.

This is a guest post by Level39. Opinions expressed are entirely their own and do not necessarily reflect those of BTC Inc or Bitcoin Magazine.

Thu Jan 13 , 2022
The Palestinian militant group Hamas has seen a surge in cryptocurrency donations since the start of the armed conflict with Israel last month, a senior official with the group said, exploiting a trend in online fundraising that has enabled it to circumvent international sanctions to fund its military operations. The […] 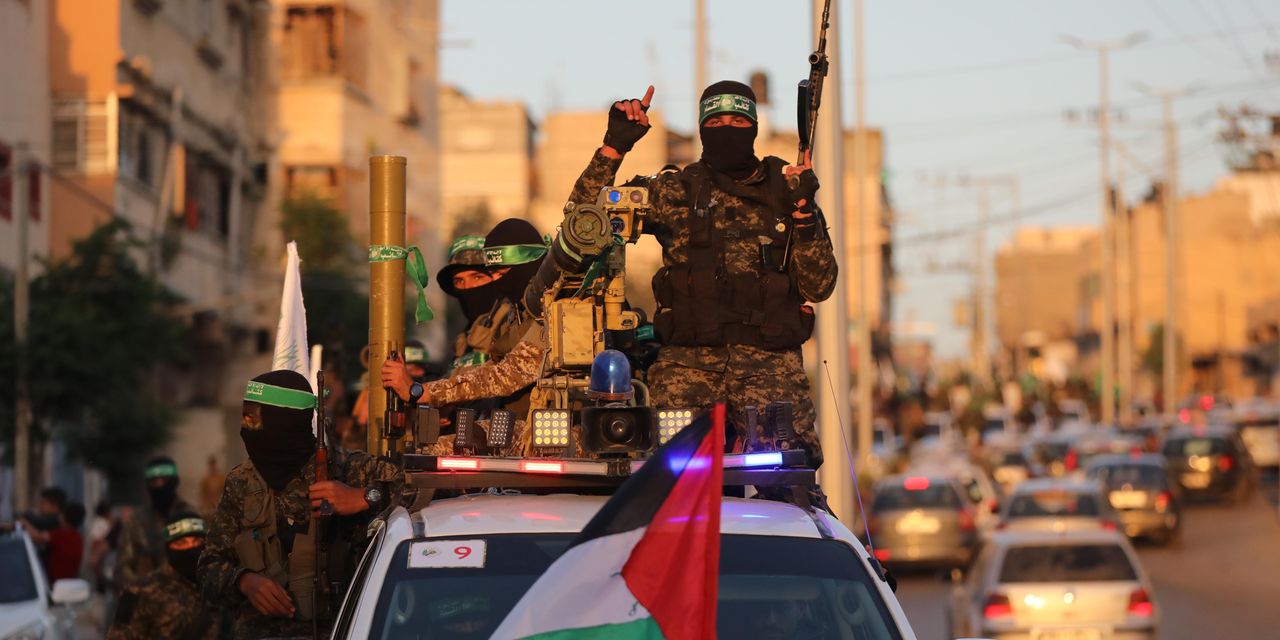