Heading into the latest earnings season, there was optimism on Wall Street that the tech giants would save the day. No other companies seemed better positioned to deal with the myriad issues plaguing the financial markets. But it turns out not even the best firms on the planet can dodge the combined forces of rising interest rates, soaring inflation, supply shortages, war, and pandemic.

Last week, the tech sector’s five most important companies all reported earnings, and the results were a decidedly mixed bag. There wasn’t much to celebrate, but there was plenty to learn about the state of the world and the direction of the economy. Here are five key takeaways from last week’s earnings parade.

(ticker: MSFT) had a nice quarter, reporting better-than-expected financial results, along with June quarter guidance that topped estimates. The good news was largely thanks to its burgeoning cloud computing business. But the outlook for Microsoft’s “More Personal Computing” segment fell short of previous forecasts. Microsoft CFO Amy Hood warned that a new-round of Covid-related factory shutdowns in China could limit production of both Surface and Xbox hardware and third-party personal computers.

Of the tech giants, none is more reliant on hardware than

(AAPL). And the company expertly navigated the supply-chain issues in the recent quarter, posting better-than-expected sales for iPhones, Macs, and iPads. But Apple also provided a sobering warning about the June quarter.

On Thursday, CFO Luca Maestri told analysts that the company faces a host of issues, including the loss of 1.5 percentage points of revenue from the suspension of sales in Russia and nearly three percentage points from unfavorable exchange rates. He said the top line would be trimmed by $4 billion to $8 billion because of supply-chain issues, including chip shortages and the same Chinese manufacturing issues that Microsoft had cited a couple of days earlier. The outlook overshadowed Apple’s strong quarter, sending shares 4% lower on Friday.

The ad market is troubled: The online advertising market faces a host of issues. Rising inflation and supply-chain problems have spurred some companies to trim ad budgets. In Europe, in particular, the Russian invasion of Ukraine is making ad buyers nervous, and worries about an economic slowdown are growing. Amazon’s ad business missed Wall Street estimates, while

(GOOGL) CFO Ruth Porat called out soft brand advertising as an issue that contributed to disappointing results for YouTube in the quarter. Apple’s “Ad Tracking Transparency” policy continues to make targeting difficult for ad sellers, in particular for Facebook parent

Expectations matter: Meta shares actually spiked nearly 20% following its earnings report Wednesday, even though the results missed expectations, and the company’s June quarter guidance implies that the current quarter will show zero growth from a year ago. Sentiment had turned dire, and the stock had a classic relief rally. Meta said it is slowing down its pace of investment in new ventures in response to slower growth—the Street liked that idea—but confirmed its commitment to building out the metaverse. CEO Mark Zuckerberg said the company is “laying the groundwork for a very exciting 2030.”

We shopped ‘til we dropped:

(AMZN) shares sold off sharply after the company provided mixed results for the first quarter. Online stores revenue in the March quarter was down 3% from a year ago, while worldwide shipping costs jumped 14%.

But the real issue is the outlook for the second quarter. Using the midpoint of the company’s revenue guidance range, Amazon’s forecast came in below Wall Street estimates by about $7 billion. Amazon also said it is seeing $4 billion in extra costs in the quarter from higher fuel and shipping costs, as well as from under utilizing some staff and facilities. The company said things should get better in the second half. But Amazon’s results underlined the fact that the pandemic era boom in e-commerce has slowed. It’s partly a return to physical stores, and partly weakening demand. On the day that Amazon reported, the Commerce Department reported that the U.S. economy shrank at a 1.4% annual rate in the first quarter. Other e-commerce stocks sold off on Amazon’s warning, and for good reason.

The cloud is still thriving: Let’s shift to some good news. The cloud computing trend isn’t just strong—it’s getting stronger. All three of the largest public cloud players—Amazon Web Services, Alphabet’s Google Cloud, and Microsoft Azure—posted impressive results. AWS grew 37% in the quarter to $18.4 billion. Microsoft Azure grew 49% on a currency adjusted basis to an estimated $11.4 billion, and Google Cloud expanded 44% to $5.8 billion.

“Our customers know they have to continue to invest in digital transformation,” McDermott says. “There is no other way to fight inflation. Software is the only deflationary force that exists in the world today.”

Fri May 6 , 2022
Bennett Raglin/Getty Images Entertainment Shopify (NYSE:SHOP) has been on my watchlist for over a year now. The stock has cratered by 75% which made me very interested in the stock. With that said, here’s a deep dive on Shopify. Enjoy! Investment Thesis The company sold off many times over the […] 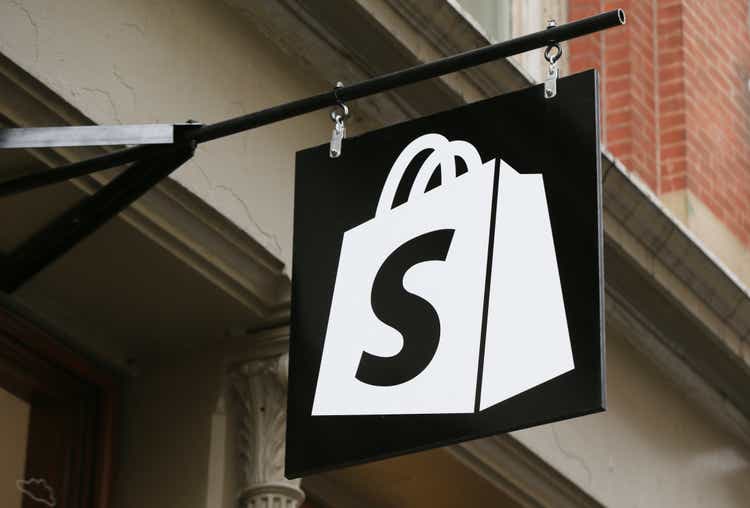